Maryland's Bail System: Why Do We Have It, and What Is It Good For? 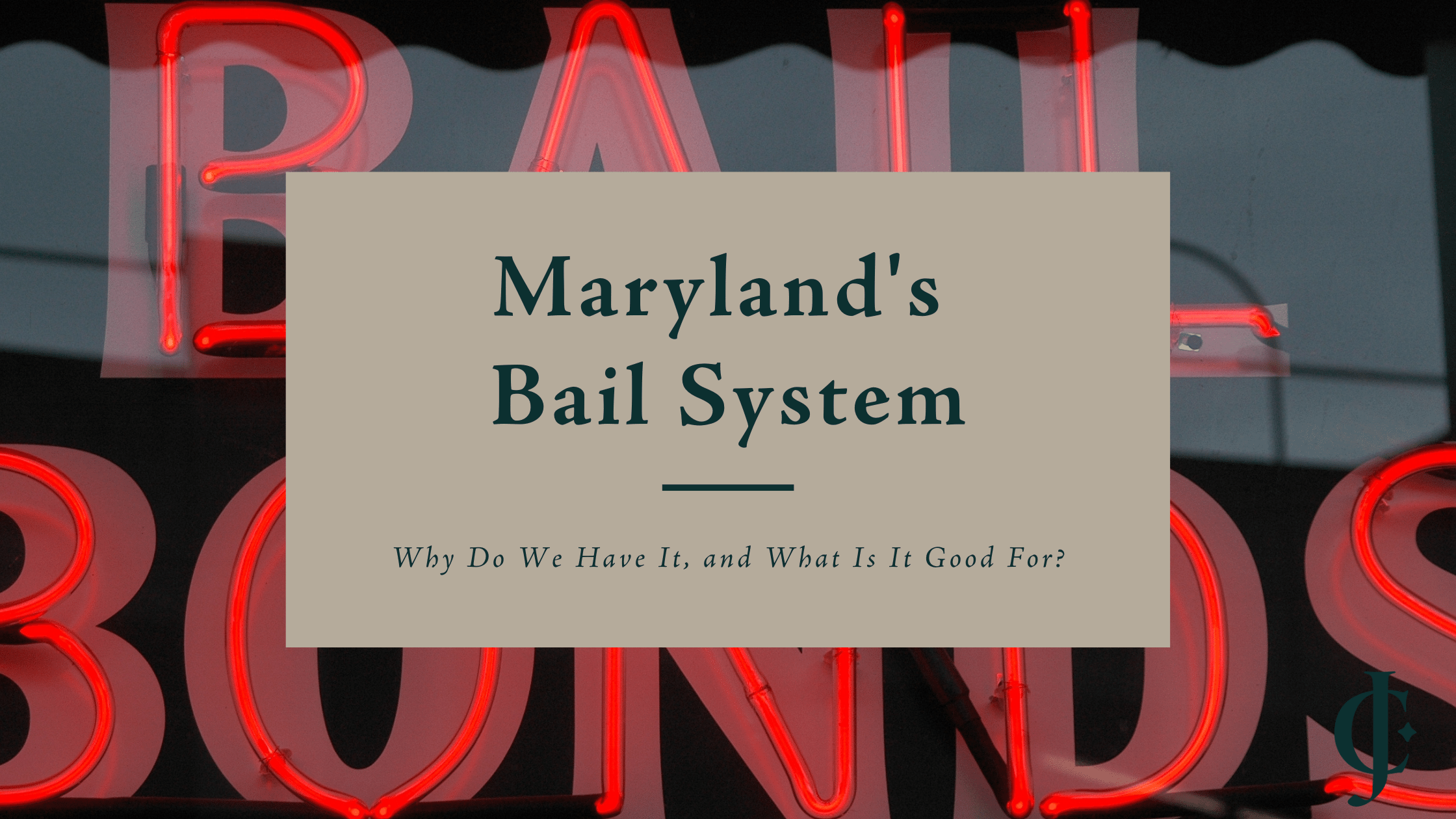 The bail process in Maryland's court system prevents people accused of crimes from being incarcerated until the time of their trial.

If not for the bail system, then jails and prisons would be bursting at the seams with the accused.

Why Does Maryland Have a Bail System?

Everyone accused of a crime in America gets a chance to prove their innocence. (It’s part of the rights on which our country was founded back in the 1700s.)

However, for that to happen, those charged with crimes still need to show up to court for their trial. Courts schedule trials months – years – in advance. So, how do the courts guarantee that someone will show up to court?

Well, they could just keep everyone in jail until their court date. That’s the most straightforward way to ensure attendance.

But, imagine for a second that everyone accused of a crime had to stay in jail up until it was their time for trial.

Jails would be overcrowded beyond where they are now. They’d expand to ridiculous sizes just to hold everyone.

In fact, everyday life would screech to a halt if everyone who committed a minor offense was locked up until their trial date.

So, we can’t keep everyone in jail until court. What can we do instead?

Turns out, Europeans back in the Middle Ages had the same problem. They actually came up with a very basic bail system that would officially go on the books here in America as early as 1789. That initial system grew Maryland’s modern system over 200 years later.

The basic idea of bail is that someone promises they’ll show up to court for their trial (and behave until that date) if the court lets them go free now. To guarantee their appearance, they’ll offer something of value in exchange. Usually, that thing of value will be a certain amount of money or piece of property.

If they don’t show up or otherwise break the terms of their bail, they forfeit the property. Otherwise, after the trial – regardless of outcome – they get the money or property back.

The bail system allows the accused to hire a criminal defense attorney, prepare their defense, and get their affairs in order before a formal trial. It also lets the government prepare for its side of the case and wrangle the administrative details that must be completed for a fair judgment to occur.

Ultimately, Maryland’s bail system means that life does not stop just because of an accusation.

How Does Someone Get Bail Until Their Trial?

When someone is arrested in Maryland, they have the right to go before a commissioner within 24 hours of their arrest.

At that “bail hearing,” the commissioner determines if they have to stay in jail, get bailed out, or simply released altogether.

The commissioner considers seven factors to see if bail can be offered – and what strings will be attached.

Most minor crimes, such as misdemeanors, are usually allowed to go free with a written notification of the trial date.

How Much Bail Do I Have to Pay?

So, let’s say that a commissioner decides that the accused can go free until trial – if they put up a bail. How much will the bail be?

The amount will depend on the type of bail issued and how the accused plans to pay the bail. The severity of the alleged crime will also influence the bail amount.

If the accused feels that the bail is set too high and cannot use any of the alternative resources available, then they may request a bail review hearing.

At the bail review, the accused goes before a judge to legally justify why the court should set a lower bail amount or different bail restrictions.

However, the accused should be extremely careful when exercising this option. If a bail review is not handled correctly, a judge may set the bail even higher – or revoke it altogether!

(This is part of the reason why you should get a criminal defense lawyer as soon as you’re accused, instead of waiting before trial. Otherwise, it might be a very long wait in jail.)

How Does Bail Release Work In Maryland?

So, the accused gets to go home and get ready for the trial without going to jail. Great!

But, they can’t just do whatever they want in the meantime. Maryland can set certain restrictions for those released on bail, including:

The bail system may not be perfect, but it’s the system we have right now to try to give people some sort of normalcy while defending themselves from accusations. Having the legal expertise of an excellent criminal defense attorney on your side can greatly help rebalance the scales of justice.

JC Law offers free 15-minute legal consultations for those undergoing bail reviews – or at any stage of the legal process – to help keep our clients’ lives moving forward despite the accusations.