Avoid Criminal Possession of a Weapon Charges – Does A Pocketknife Count? 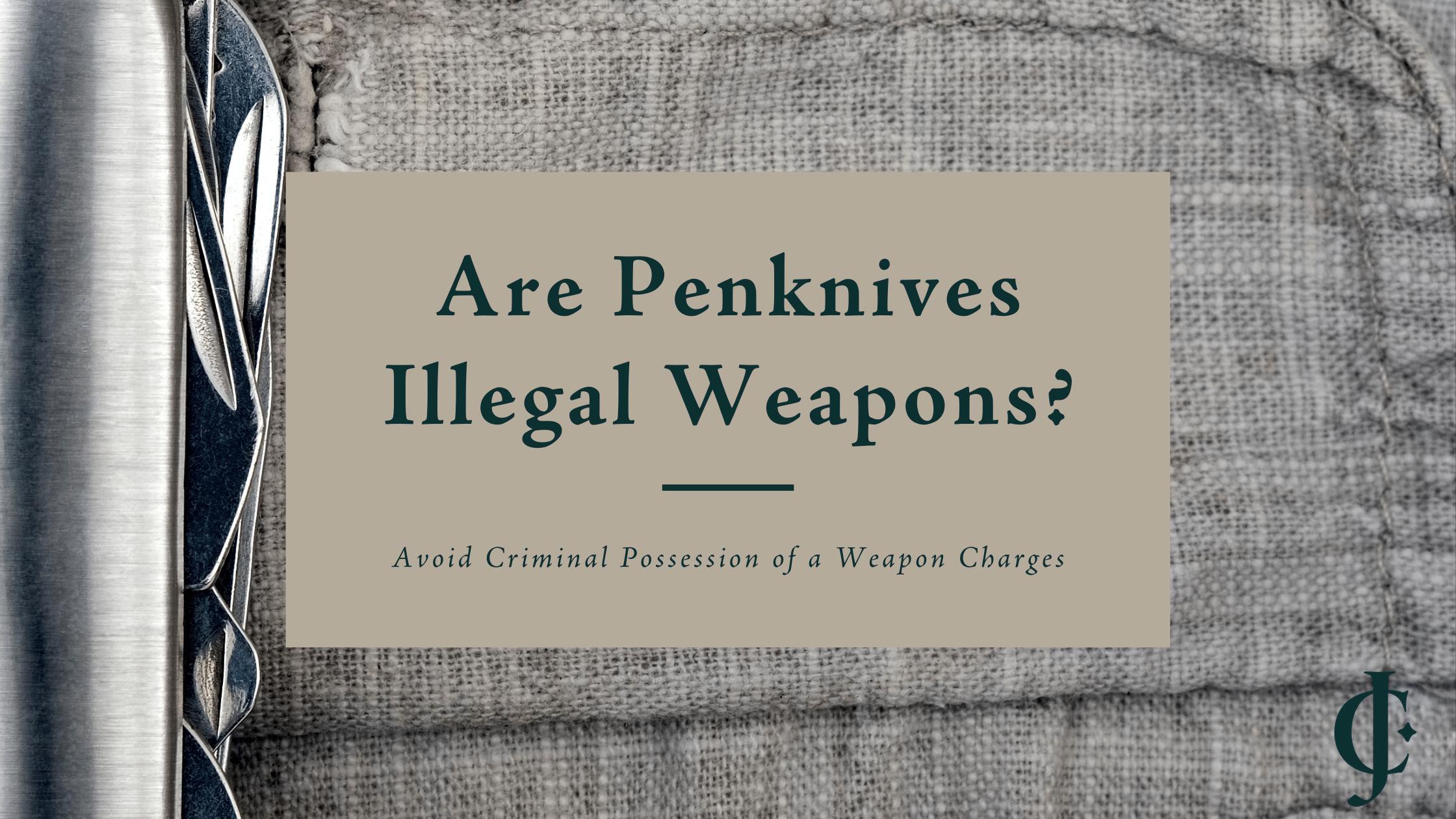 Many of us carry a pocketknife around on our keychains or in our pockets. (They’re handy at opening all those Amazon boxes we've been getting this year!)

But, have you ever stopped and considered what could happen if you were stopped by police and you were carrying that pocketknife? Could you be charged with criminal possession of a weapon? Maybe!

What Does “Criminal Possession of a Weapon” Mean in Maryland?

Maryland state law describes “criminal possession of a weapon” as basically having or owning a weapon with the intent to harm someone else.

In Maryland, “weapons” are generally legally categorized as guns or dangerous weapons.

What’s automatically considered to be a “dangerous weapon” according to Maryland law?

So, your pocketknife is ok to have… until you use it to intentionally inflict harm on another person.

Stick to opening Amazon boxes, and you are problem free!

But, stabbing the Amazon driver because they were late with the package might justify a criminal possession of a weapon charge, along with an aggravated assault consideration.

As for guns, Maryland state regulations are stricter on firearm use and ownership than the broader federal guidelines.

For example, assault weapons are outright banned in Maryland. These weapons include AK-47s, AR-15s, assault style semiautomatic or automatic rifles. Having these at any time would generally mean a criminal possession charge.

Also, handguns require a permit to own, carry, and/or conceal in Maryland, while hunting rifles and shotguns generally do not. These guns fall into a more grey area of the law, as legal possession depends on circumstance.

Does Having a “Weapon” Automatically Count for Criminal Possession of a Weapon Charges?

Nope – just having a weapon that is listed as “dangerous” does not mean you are automatically criminally possessing it, if it is not concealed or otherwise being carried with the intent to harm someone.

For example, Marylanders might own nunchucks, but only for use during martial arts training or for display. (Your friend’s stand holding ancient battle swords in his mancave would also be legal.)

When it comes to firearms, though, there are a bunch of ways Marylanders can end up in criminal possession of a weapon.

We covered certain firearm regulations earlier, but Maryland also restricts ownership depending on people’s psychiatric state and criminal history. Certain people who possess – not even own, and not even to commit a crime! – any sort of gun could be automatically slapped with a criminal possession of a weapon charge.

Marylanders Who May Not Own or Possess Guns

Marylanders who may not be found holding or otherwise owning a gun include those:

You can also get on the “banned for guns” list if you’re currently undergoing a protective order case due to domestic violence. In that situation, you must turn over any weapons/guns you possess to authorities until the order ends.

When Can You Legally Possess Guns or Dangerous Weapons In Maryland?

Now that you know what our state considers criminal possession of a weapon, what can you possess legally and how?

First of all, Maryland State Police have a list of regulated firearms that are allowed and not allowed for sale in the state.

Maryland also only allows the sale of handguns manufactured after January 1, 1985 and found on the Handgun Roster.

Who else can legally possess and carry a dangerous weapon or gun?

How Bad is Criminal Possession of a Weapon In Maryland?

Weapons charges are serious offenses, but the charges and sentences for them vary widely. Convictions can be either a misdemeanor or felony and could carry a fine.

Current Maryland laws on the books specifically regulate the carrying, owning, discharging, use in a crime, and concealment of guns or dangerous weapons.

Maryland State Charges, Penalties, and Fines for Criminal Possession of a Weapon

As we previously reviewed on our page dedicated to weapons crimes:

Criminal possession of a weapon charges are often used by prosecutors to “level up” other charges. For example, a regular assault charge can be made into an aggravated assault with a deadly weapon charge when a gun, knife, club, or other weapon is used during the incident.

A seasoned criminal defense attorney can help you navigate the gamut that weapons charges can bring and know for sure how to best defend your case. Whether you are looking at your first or fifth weapons charge, JC Law will champion your side of the story in court for the best possible outcome. Schedule your free initial consultation today!